Effect of a dam on epilithic algal communities of a mountain stream: before-after dam construction comparison 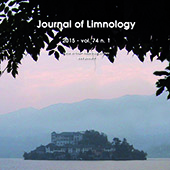 This work is licensed under a Creative Commons Attribution-NonCommercial 4.0 International License.

Most read articles by the same author(s)

FOR AUTHORS
FOR REVIEWERS
INDEXING
LINKS

Tweets by Journal of Limnology

is an Open Access, academic peer-reviewed journal published by PAGEPress®, Pavia, Italy on behalf of the CNR-IRSA, Italy.
All credits and honors to PKP for their OJS.
Registered in print in Verbania, 7-10-1959, n. 58.